How to Install Xrdp Server (Remote Desktop) on CentOS 8

Xrdp is an open-source implementation of the Microsoft Remote Desktop Protocol (RDP) that allows you to graphically control a remote system. With RDP, you can log in to the remote machine and create a real desktop session the same as if you had logged in to a local machine.

This tutorial explains how to install and configure Xrdp server on CentOS 8.

Generally, Linux servers don’t have a desktop environment installed. If the machine you want to connect to doesn’t have GUI, the first step is to install it. Otherwise, skip this step.

Gnome is the default desktop environment in CentOS 8. To install Gnome on your remote machine, run the following command

Depending on your system, downloading and installing the Gnome packages and dependencies may take some time.

Xrdp is available in the EPEL software repository. If EPEL is not enabled on your system, enable it by typing:

When the installation process is complete, start the Xrdp service and enable it at boot:

You can verify that Xrdp is running by typing:

The main configuration file is named xrdp.ini . This file is divided into sections and allows you to set global configuration settings such as security and listening addresses and create different xrdp login sessions.

Whenever you make any changes to the configuration file you need to restart the Xrdp service:

Xrdp uses startwm.sh file to launch the X session. If you want to use another X Window desktop, edit this file.

By default, Xrdp listens on port 3389 on all interfaces. If you run a firewall on your CentOS machine (which you should always do), you’ll need to add a rule to allow traffic on the Xrdp port.

Typically you would want to allow access to the Xrdp server only from a specific IP address or IP range. For example, to allow connections only from the 192.186.1.0/24 range, enter the following command:

To allow traffic to port 3389 from anywhere use the commands below. Allowing access from anywhere is highly discouraged for security reasons.

For increased security, you may consider setting up Xrdp to listen only on localhost and creating an SSH tunnel that securely forwards traffic from your local machine on port 3389 to the server on the same port.

Another secure option is to install OpenVPN and connect to the Xrdp server trough the private network.

Connecting to the Xrdp Server

Now that the Xrdp server is configured, it is time to open your local Xrdp client and connect to the remote CentOS 8 system.

Windows users can use the default RDP client. Type “remote” in the Windows search bar and click on “Remote Desktop Connection”. This will open up the RDP client. In the “Computer” field, type the remote server IP address and click “Connect”.

You can now start interacting with the remote desktop from your local machine using your keyboard and mouse.

If you have questions, feel free to leave a comment below. 🙂

This site uses Akismet to reduce spam. Learn how your comment data is processed. 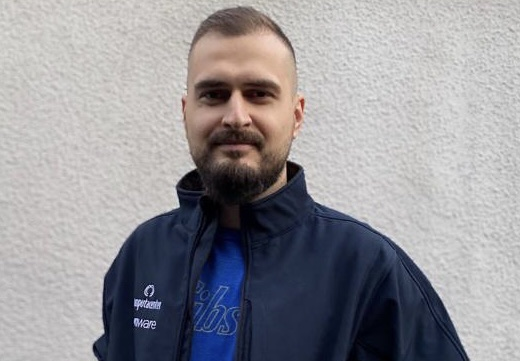